The Bed of Procrustes by Nassim Nicholas Taleb – Book Review

Posted on January 5, 2011 by randysrules 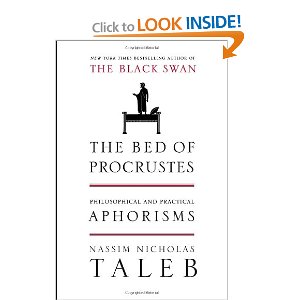 The Bed of Procrustes - NNTaleb

I received a copy of The Bed of Procrustes as a Christmas gift at the end of 2010, have devoured it, and found it to be delightful, intriguing, useful and infuriating!

I will certainly be revisiting the book often in the future to goad further pondering of, investigation into or application of specific aphorisms found within it.

An aphorism “(literally “distinction” or “definition“, from the Greek: ἀφορισμός, aphorismós, from ἀπό + ὁρίζειν, apo + horizein, “from/to bound”) is an original thought, spoken or written in a laconic and memorable form”, according to the sometimes reliable Wikipedia, and in the standard dictionary definitions usually also referred to as a short, terse or concise statement.  Economy of words is an important performance specification for an aphorism.

Mr. Taleb has sorted his collection into twenty-two appropriately brief chapters that follow his recounting of the story of Procrustes.  Taleb published a goodly number of aphorisms on Twitter, appropriate to the maximum of 140 characters format for “tweets” on that social media site.  His Postface concludes this little book with an explanation of the general theme of his work and an informative explication of aphorisms, maxims, epigrams and similar short sayings.

Many of Taleb’s aphorisms are also maxims, statements of principle self-evidently true and reasonable.  A number are simultaneously epigrams, short, terse, ingenious, witty, or pointed, and sometimes poetic sayings.

I will not fill cyberspace with quotes of many aphorisms, they are for you to discover.  The collection will serve me as a valued resource to be mined for appropriate applications in the future.  I appreciated the majority of Nassem Nicholas Taleb’s aphorisms, particularly informed by prior readings of Fooled by Randomness, The Black Swan, and his blog, www.fooledbyrandomness.com .

I began this brief article by stating that some of the aphorisms were infuriating.  That reaction was from one of three sources: in the sense of not yet fully appreciating or comprehending certain of them (provoking a deeper consideration by readers is salutory, but sometimes infuriating), in the understanding of an actual or probable absolute truth with clear application, or (for a few), because I had harbored similar thoughts and did not clearly express them (or have them published!).  I believe many readers will find similar reactions, and be pleased to find Taleb’s words expressing them in a manner that elicits thought and application without imposing a self-pride of authorship!

If you have not yet read any of Taleb’s other works, and I highly recommend that you do in order to receive an extraordinary and frank insights into how to avoid being run over by the runaway trains of our society, particularly its “leaders” and “prognosticators” in any and all disciplines, and by the processes of the earth that we inhabit together.

Even if you have not, I highly recommend The Bed of Procrustes.  As to the many values of an aphorism, here is “one for the road” from Nassim Nicholas Taleb…

“A good maxim allows you to have the last word without even starting a conversation.”

From a professional background in architecture, community and regional planning, urban design, leadership, and fine arts, this blog provides insights on ethics, leadership, architecture/planning/urban design, Venice, and whatever intrigues me at the time. Enjoy!
View all posts by randysrules →
This entry was posted in Recapitulation, Reformation, Renaissance, Renaissance Rules, Zeitgeist and tagged Book Review, Recapitulation, Reformation, Renaissance, Renaissance Rules, Taleb. Bookmark the permalink.
Loading Comments...
%d bloggers like this: