“The streets are flooded!  Please advise!”

Since the only “street” in Venice is the relatively newly constructed Strada Nova, and acqua alta is more than sufficiently discussed, this article looks at the essential waters of Venice – Mare, Laguna, Bacino, Sacca, Darsena, Canale, Rio are some of their titles. Each title has a specific import and a correct “attachment” to places, the geographic locators provided by San Marco, Canneregio, San Lio and Giudecca, for example.

Therefore, a brief cruise around the watery names of Venice seems in order!

Mare: Sea, as in the Adriatic Sea (Mare Adriatico).  The wedding of the City of the Lagoon to the Sea gave Venice a dowry of wealth for over a millenium.

Laguna: Lagoon, as in the Venetian Lagoon (Laguna Veneta), a shallow, marsh-rimmed body of water along a seashore that is separated from the sea by a littoral, a line of sand islands enriched by river runoff from the mainland and scupted by tides and waves, the Lidi (Lido di Venezia).

The Lidi were Venice’s protective outer “wall” from which it was separated by the “moat” of the Lagoon – in reverse order from the conventional notion of castle walls and moats!  The dichotomy of the inner “wall” of marshlands protecting Venice from the mainland, again separated from Venice by the moat of the Lagoon, is quite striking.

Bacino: Basin, as in the Bacino di San Marco, a broad cove generally partially enclosed by land masses.  The youngster in this class of water is Bacino della Stazione Marittima, the primary berthing area for large cruise ships at the west end of the City.

On a smaller scale, Bacino Orseolo was constructed near Piazza San Marco to serve as a central docking point for gondola.  You will find the Hard Rock Cafe immediately adjacent!  Inside, hard rock music; outside, opera singing gondoliere.

This is just another example of the paradoxical confusion of genre so prevalent in today’s Venice!

Sacca:  Sacca de la Misericordia, also labeled Bacino della Sacca della Misericordia to help “confuse the genre”, is located on the north side of Canneregio, and today serves as a yacht basin.  A sacca is a niche or recess, smaller than a bacino or bay, and well illustrated by Misericordia’s sacca.  The Sacca di Santa Chiara occupied the area now consumed by most of Piazzale Roma (which also swallowed Isola Santa Chiara itself) and much of the railyard behind the Stazione Treni di Santa Lucia.

Darsena: Darsenia Vecchia (Old) and Darsenia Nuovissima (New, as of 1320, that is…) – also referred to as Darsena Grande after two adjacent basins were joined a few centuries ago – are the major water areas within the Arsenale, a word thought to derive from a name for middle eastern docks for construction of ships, then mutated into d’arsena. 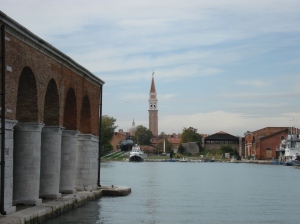 In Venice, incorporation of the foreign term into the local idiom produced D’Arsenale, or the Arsenal, the ultimate construction and equippage works for the warships and larger merchant ships of the Republic.

Your best encounter with this vast area is achieved by attending the Biennale exhibition within the surrounding Corderie (rope making hall) and other old naval support structures.

Canale: A channel, usually shaped by man from a natural waterway, such as the Canale Grande, or newly constructed to re-route water, as in the mainland Canale which reroute the rivers that formerly entered the Lagoon around it in order to protect the Lagoon from flooding and siltation. 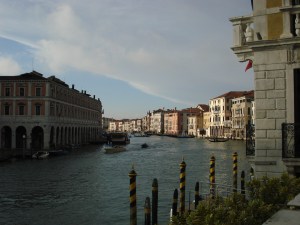 The west end of the Canale Grande (it had several previous names) is actually called the Caminale Santa Chiara, with caminale normally meaning “route for transport of goods to market”, between Piazzale Roma and the Railway Station.  Of course, as was noted above, the area was originally open water surrounding Isola Santa Chiara, and named the Sacca di Santa Chiara.

Many old guidebooks, parroting each other, stated that Venice had only one canal, the Grand Canal.  While such misdirection continued to be written and copied, other Canale were “hiding in plain sight”: Canal de Canaregio, Canal della Guidecca, Canale della Grazia, Canale delle Fondamente Nove, Canale de la Misericordia, Canal di San Pietro, and more including many routes out in the Lagoon and amidst the outlying islands.

Rio: A smaller river, plural rii, used to delineate the smaller canals of Venice.  On the mainland, names such as Rio, Fiume, Torrente and Borro describe freshwater streams by size from the large to small. 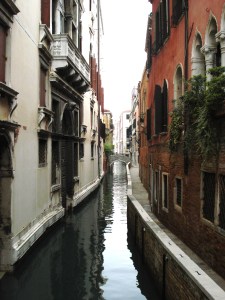 In Venice, a small rio may be referred to as a riello.  One of the few remaining examples is the Riello di’ San’Antonio which today dead-ends into a Rio Terra just north of Campo San Polo, but formerly divided the Campo from the palazzo now on its northeast side and connected to the now also dead-end Rio Erbe-Priuli just beyond the south side of the Campo.  This is a perfect example of the generations of change in Venice – from palazzi accessing the campo (field) via private bridges across a rio, to palazzi with railing-enclosed “loges” from which to view bullfights in the campo, to the palazzi and bacare forming the hard wall of the campo we see today!

Venice – Even the Air is Made of Water! 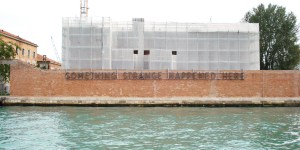 Perhaps the most all-encompassing water that impacts residents and visitors in Venice, lost in the dream-like sea of calli, rii, palazzi, campi and tourists, is the universal and dream-like nebbio…

Lost in the fog in the midst of the familiar.