Pierre Case and the Mystery of the Sotoportego

Posted on November 8, 2011 by randysrules

Artist Pierre Case lives and creates in the Canton of Ticino in southernmost Switzerland, the sole Italian-speaking Canton of that Confederation.

In addition to achieving great renown for his innovative art during his 67 years, he served community and nation with distinction in many roles and on many boards promoting the arts through the decades prior to 2000 A.D.

After suffering a severe stroke around then, he devoted his recovery and the subsequent decade completely to his art.  The results of that remarkable time and unrelenting effort were on display in Venice, Italy this summer in a well-curated exhibition that we visited and there were fortunate to converse with the very lively, energetic and articulate Pierre Case (grazie mille!).  I think that I was more “winded” from the ascent up about 76 very tall steps to the upper floor hall than was the artist (I will save the Ground Floor great hall and the exhibit we observed there for another post)!

The “Misteri del Sotoportego” exhibit was mounted in the huge First Floor of the massive Scuola Grande della Misericordiain Sestiere Cannaregio, the chapter hall of the Scuola and one of the largest rooms in Renaissance Venice.

That incredible building, begun by Jacopo Sansovino in about 1535 and completed in 1588, is itself seeing a rebirth through ongoing restoration of wall murals and stabilization of its structure.

“Sottoporteghi” are passageways in Venice that actually “tunnel” under buildings to connect (in most cases) previously constructed public streets (e.g., calli) and open spaces (e.g., campi), connections that occurred later in the life of the island City as more and more bridges were constructed to interconnect its islands across the many intervening rii (small canals).

In “Misteri del Sotoportego”,Case was inspired by the uncertainty and fear of entering the darkness of the passageway, the unknown experience of the passage through lying ahead, and the joy of seeing the light, the life, at the far side of the journey.

He found, explored, obsessed upon and created from the 240 sottoporteghi extant in Venice, recording his discoveries within each one of them!   From that, this exhibition of twenty very large works revealed what many of those journeys revealed to him – life, physical realities that brought him through trauma and recovery!

Pierre Case’s physical presence in each of these 200 x 310cm works was represented by an “across the board” straggle of rusted barbed wire – a material obviously denoting limitation but aso transparency due to its slenderness.

The shear size of each work enables the observer to feel personally enveloped within each sottoportego.

Ten of the pieces were accompanied by stories from Venetian author and raconteur Alberto Toso Fei (you may desire to learn more about him and his very innovative vocation at his website, www.albertotosofei.it).

The sottoporteghi that inspired Case’s twenty representations included ten that I found most enthralling (not related to the ten of Alberto Toso Fei’s stories!).  They were Sotoportego… 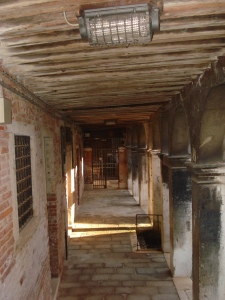 Pierre Case’s inspiration through art (his calling) to have his journey to reinvigorated health and renewed work energized in Venice via his comprehension of the journey through the sottoporteghi is inspiring.  His seemingly obsessive/compulsive study of 240 of them is mid-numbing to consider – until you consider that the opposite occurred for him…

The “un-numbing” of his mind!

From a professional background in architecture, community and regional planning, urban design, leadership, and fine arts, this blog provides insights on ethics, leadership, architecture/planning/urban design, Venice, and whatever intrigues me at the time. Enjoy!
View all posts by randysrules →
This entry was posted in Art, Renaissance, Venice Italy and tagged Art, Pierre Case, Renaissance, Scuola Grande Misericordia, Sotoportego, Venice, Zeitgeist. Bookmark the permalink.

2 Responses to Pierre Case and the Mystery of the Sotoportego