Posted on February 8, 2012 by randysrules

Chianti, the legendary domain in the heart of Tuscany between Firenze and Siena, spanning provincial borders and several millennia.  The heart of Chianti enfolds many extraordinary, peaceful towns, country monasteries, castles, villas and vineyards, and the ruins of a thousand years of war.  This is the production zone of the famous wine, Chianti Classico, protected by the quality control and marketing consortium known as…

On the high west ridge above the market town of Gaiole in Chianti and almost due east from walled Radda in Chianti, Vertine encompasses all of those landmarks within its 360 degree view of this world.

The highest range of the Monti del Chianti and its summit, Monte San Michele, limit Vertine’s command to the east and north in a haze of unbelievably green forest, dotted with castle ruins.

This country invites the explorer (adventurous and cautious!) with its serpentine roads and glorious views.  The SR’s – State Routes – are very well maintained, although often without any shoulders, but many hairpin turns and amazing drop-offs!

Any route, whether busy or almost untouched by the automobile, beckons and leads to lasting memories.

We have never managed to truly “get lost” (a wonderful internal compass prevents that), but have often delighted in the wrong turn or the choice to take an “I wonder where that goes” road with some confidence in our knowledge of the lay of the land.

The fortified town of Vertine was apparently founded sometime around 950 AD, designed and constructed with a spiral street leading to the hilltop fortress.

Access is through the north gate, and past the tall remnant of the extremely sturdy torre, the “castle keep”.

A gate on the opposite side of town is not intact, although part of its defensive tower remains to mark the spot. 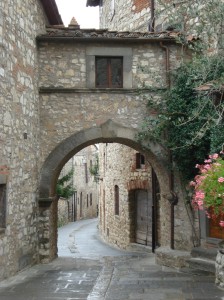 The walls are generally in good repair around a significant part of the town perimeter.  The current, 14th-Century church of San Bartolomeo has been well restored and retains portions of frescoes from the 1400’s inside.

Overall, because of the lack of many battles over the town in the Guelph versus Ghibbeline Wars, and its control by a single Florentine-allied family for many centuries, Vertine is one of the more remarkably intact small castle towns in Chianti.

There is little commerce here – one cafe, Cafe Blue – since Gaiole provides for all non-farm needs just down the hill, so pristine and “peaceful” – almost to the extent of “solemn” – best describes the atmosphere of this high aerie.

We have wandered the entire town without seeing anything alive and moving except cats, and the only sound that of soft voices of families within the houses.

To reach Vertine from Siena, take the S408 (like all designations, maps and signs sometimes use “S” and sometimes “SR” – follow the numbers and the plentitude of signs!) north via Pianella to Gaiole.  After Pianella, the road follows the Torrente Arbia and its tributaries upstream to Gaiole.  Near the middle of town, turn west (left) up Via Spaltenna (an Etruscan origin name – the Romans were newcomers!)  curving near the fortified church of Santa Maria di Spaltenna onto Via Vertine to wind up the ridge on a classic but short Tuscan “white road” through airy vineyards.

From Firenze, head south on the S222, the famous “Via Chiantigiana”, through Strada and the bustling market town of Greve on the banks of its eponymous river until the base of the final climb up to the fortress town of Castellina in Chianti.  You will have passed through the homeland of the Mona Lisa and the great explorer Verrazzano.  Turn east (left) there on the S429 through proudly walled Radda and, about 4km further, turn south onto the white road Via Aldo Moro through the fields and Castello di San Donato in Perano to then finally rise up the ridge to the Via Vertine and a short turn to the castle.  Coming either way, if you miss Via Vertine you will be in Gaiole near Via Aldo Moro!

From both Siena and Firenze, your travels will take you through a dozen remarkable historical places, close by a hundred wineries and a score of castles.  We cherish — and share — our memories.  Along the way or at the destination,…

Your memories are waiting for your presence.