The small island community of Burano lies fifteen minutes north of Murano and the transfer point for the lonely vaporetto to Torcello.  From the Fondamenta Nove on the north shore of Venice, the one-way trip can take about forty-five minutes, and is worth every minute of that time for the experience of the Lagoon – whether or not you transfer to sojourn on the cemetery island of San Michele or spend a lot of time on the glass island, Murano.  An entire day can be easily and delightfully whiled away on Burano, wandering its quiet lanes, enjoying the vistas across the Lagoon, and sampling its monuments, food and wares.

Burano is extremely famous for its brightly painted houses – a riot of colors – and its historic fine lace production, both of which make it a very bustling tourist stop, particularly around lunch time!  It is also famous for one of its native sons, Baldassare Galuppi.

Baldassare Galuppi (1706-1785) was born on Burano, and was later nick-named “il Buranello”.  A virtuoso pianist and composer, he became famous as “The father of comic opera”, along with his most renowned librettists, Metastasio and Carlo Goldoni.  He was enticed to England for a while, and worked in Russia for Catherine the Great for three years.  In both cases, he was granted leave from his job as Director of Music for the Ospedele dei Mendicante in Venice.  He also served at the Basilica di San Marco, eventually becoming the head of music.

Although best known for comic opera, he wrote a considerable body of religious music, as well.  His statue stands in the middle of the Piazza, perhaps looking toward the home of his birth.

On the south side of the Piazza  rises the parish church, San Martino.   The oldest surviving records indicate that it was founded in 959.  However, Burano was one of the earliest “refugee” communities built in the Lagoon, most probably by residents from the nearby mainland city of Altinum when they began fleeing recurring Trans-Alpine incursions by Attila and the later Goths that started in the early 400’s. 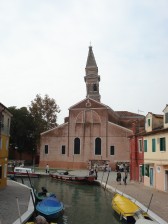 In his “Cronaca Altinate”, John the Deacon (died 1009) referred to island communities named after the six gates of old Altinum, originally a large and very important Roman city. Porta Boreana was its north gate, and most historians believe that “Boreana” became “Burano” over the years.  The church is the second or third building on the site since then, most likely succeeding an earlier wooden one.  Given the incredible tilt of the early 1700’s campanile, another may be needed in the near future, but it looks like it might be headed away.  The church was designed as a Greek cross plan with a mid-apse transept, the north arm of which serves as the main entrance directly off Piazza Galuppi.  For some unknown reason, the front of the church abuts houses and, therefore, no real facade exists.

Across the Piazza from San Martino is the Museo del Merletto di Burano (Merletto = Lace) in the old Palazzo Communale, (town hall), one of the Municipal Museums of Venice.  If you will be in Venice for a few days, purchasing the multi-pass is an economical way to gain entry to a great array of fantastic museums for not much more than the price of a couple of single admissions.  This museum was rebuilt a few years ago, and provides a fascinating history with original examples of lace through the ages, particularly from famed Burano.

A few doors down from the Piazza on the Via Baldassare Galuppi commercial main street is Da Romano, a restaurant famous for its  Risotto al Pesce (rice with go fish).  “Go” is the name of the tiny and very delicate fish used in making the stock for the risotto, not a reference to the childhood card game.  Anthony Bourdain’s “No Reservations” television show, episode “Venice 1:3” contains a scene at Da Romano and the preparation of this very special (and delicious!) dish (Link: http://bit.ly/AopG3p ).  The go must be very delicately handled to prevent the stock from becoming bitter, and risotto always prepared fresh.  Because of the extra labor in preparation, this dish is only served to order to two people, with no “single” serving available.

A Day Off From Venice?  Really? 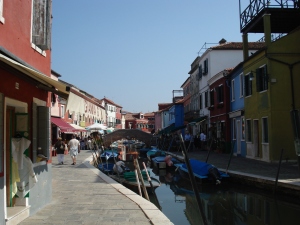 Give yourself a “day off” from the bustle of Venice out on Burano.  A Lagoon cruise, remarkable houses, the search for actual, genuine “Made in Burano” lace, great food and wine, all await you, while Baldassare Galuppi smiles down on you approvingly from his perch in his Piazza.  And remember, if you crave fish risotto at Da Romano, take along a like-minded friend because,

“Go Fish is a Game for Two”