The number, location and names of parish churches in Venice has varied over the millennia, along with reassignment of some former parishes as subsidiary locations and some monastery closings leaving a parish church in later times.

Churches were also established in other island communities around the Venetian Lagoon – Torcello, Burano, Mazzorbo, Murano, Ammiano and Costanziano in the Northern Lagoon and others in the Southern Lagoon, as well on the barrier islands, the lidi,  between the Lagoon and the Adriatic Sea, often in  chronological related developments.

Historical archives — although incredibly numerous and detailed due to the obsessive-compulsive record-mania of the Republic — are now incomplete due to fires, plundering, flooding and other assorted archival maladies.

Over 1700 years, a few things are bound to become misplaced. 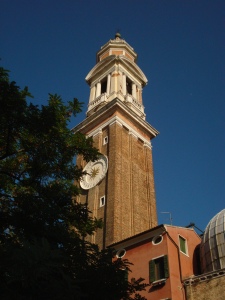 Long-forgotten or often changed “original” island names, island expansions and mergers also cloud the issue.  Even today, so many different spellings for places in Venice are in circulation on signs and maps that the difficulty of following the historical trail is easily perceived.

A mystery found in many historical development studies that identified and dated “proto-island communities” is the uniform exclusion of communities and islands in places where history records a church or monastery to exist at the same times as the islands that the studies identify!

Regardless of such exclusions, we can safely assume that such churches were,

NOT in the water!

Another dilemma is an insistent dating of many church foundings to when the first masonry structure was built on a site even though in many early cases a wooden church existed during prior decades if not a century.

Those accounts do strive to avoid “conjecture” and “legend” by limiting “existence” to surviving paper records, yet excluding certain ancient historians’ reports as “unreliable” is often too judgmental.

Reliable records state that thirty parishes existed prior to 900, with the first said to be San Giacometto di Rialto, founded around 421.  Paolino’s 1346 map of the City, preserved in the Marciana Library, shows over 100 churches.

Eight of those churches were “Matrix” churches, founded upon the direction of St. Magnus of Oderzo, the first Bishop of Venice.  Some contemporary writers and their uninquisitive copyists state that there were twelve “Matrix” churches, but eight appears to be the correct number of them.

Prior to Bishop Magnus’s designation of the eight, a number of churches existed in the already two hundred year old Venice.

Only two church foundings can be identified during this century, perhaps parish churches serving communities that pre-dated the permanent exodus of a number of mainland communities to the Lagoon islands:

San Giacomo di Rialto (421), now referred to as San Giacometto, on the high island of Rivalto (Rialto), the first Ducal (Doge) seat after the 810 consolidation of island community governments.

Six more edifices added to the list – including the first “Doge’s Chapel” and two that  may have been founded as monasteries and later served their adjacent communities as parish churches as well.

San Geminianus e Menna (552), on the original island of Brolio and later called San Geminiano and last rebuilt by Sansovino to accommodate lengthening Piazza San Marco, finally demolished for construction of the “Napoleon Wing” at the west end of the Piazza.

San Teodoro (564) – the first “Doge’s Chapel”, but the Ducal (Doge) seat was established in 810 at Rialto, not San Marco, so this may have first been a parish church, later called San Todoro, on Morso island, then demolished for construction of the first San Marco “chapel”

Santa Croce (5xx), originally a monastery, in the Luprio group of “high-backed” islands

Three “pre-Magnus” parish churches were noted to have been established in the early 7th or perhaps very late 6th Century:

Sant’Antonin (600?), later San Antonio, on one of the two Gemelle islands, “The Twins”

Santi Apostoli (some say it was founded in the 800’s, but Magnus claimed the site in around 643), perhaps on Orio island, the other “high bank” of the rivalto area, but a place where the “proto-island community” folks cannot seem to find an island (the existence of the church and historical high bank designation might be a clue…)

San Zaccaria (827), founded as a monastery on Ombriola island, not a parish church – Bishop Magnus’s designation came in 840 or a bit later

San Giovanni in Bragora (640+), perhaps in the reclaimed “bragora” west of Gemelle

By the late 600’s, at least 19 churches existed in Venice 250 years into its “official” existence as a commune, including two monasteries also serving as parish churches and one that would later become the first Doge’s Chapel.

A Modern Fog Machine – “The Web”

Since so much of what is published on “the web” is sourced and sourced (or copied, edited, folded, spindled and mutated) again, and again – often without attribution or caveats – modern technology seems to be making the historical record more cloudy and imprecise than less.

What is a “non-academic” student of Venice to do?

Well, with forgiveness easier to obtain than permission, I offer the above “best construction” gleaned from what I have been able to access and review over the past several years.

Your mileage may vary, and I am, as always, appreciative of verifiable corrections!