In the Venetian Lagoon, to the north of the great City of Venice, several extraordinary island communities draw visitors, commerce and historians today.  The best known among them – the active towns – are Murano, the “glass island”, and Burano, the “lace island”.  Close to Burano are Mazzorbo, on whose “eastern” island a mostly modern residential community, vineyards and farmlands are found today, and virtually abandoned Torcello with its famed ancient Cathedral church, Santa Maria della Assunta.

These quiet fishing islands were populated by an influx of refugees from mainland ex-Roman towns during the many years of barbarian invasions from over the Alps and through what is now known as Lombardia to the far west.

Tired of the disruption, losses of life, property and freedom, large contingents of centuries-old townspeople moved into the lagoon for peace and freedom, although accompanied by a far more fragile existence in the tidal marshes.

Churches, forms of municipal government and commerce accompanied the many families.  Many stayed permanently, after a few generations of disruption on “Terra Firma”.  Others kept land and connections on the mainland, but eventually reformed their communities on the islands.  They often incorporated key artwork and stonework from major mainland buildings into their new communities. 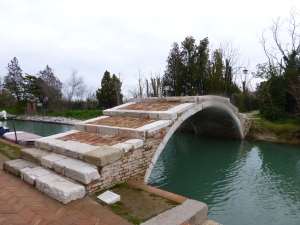 Two of those “new towns” are entirely absent today, Constantiacum and Ammiano, that were as close to each other as Torcello is to Mazzorbo Occidentale or Burano are to each other, but located north of the Torcello grouping of islands.

These thriving communities eventually succumbed to settlement and the waves over the course of the 14th and 15th Centuries.  Many of the monasteries, monache (convents) and other institutions received permission to relocate to the other islands, including a substantial number to Venice proper, far to the south.  Today, a great number of paintings, sculptures, ecclesiastical “furnishings” and even the builders’ stones themselves can be found in their new homes in various churches of Venice.

The greatest proportion of the citizens and institutions of the old and important mainland City of Altinum relocated from that ancient port and Roman road hub, located a few kilometers north of Venice’s Marco Polo Airport, to an island group in the delta of the Sile River.  Altinum is reported to have had six grand gateways into the City, “Porte”.  Many historians and commentators, often repurposing historian’s records, state that the citizens of Altinum also took those six gates with them into the lagoon!

The relocation of the six Porte of Altinum was not known to be a physical disassembling, transport and reassembly of the physical stone gates onto islands into the Lagoon – although, who knows for sure given the amount of further relocation to Venice in later centuries – but the transportation of the City Gates names to the various new island neighborhoods.  Were the names reassigned based upon keeping neighborhoods together that were in proximity to each of them on the mainland?  We may never know.

What is presumed with reasonable agreement is that the following virtual reconstruction of Altinum’s gates on the relatively closely spaced group of Sile delta islands ccurred by renaming them after those great gates.

The new protective city wall of Altinum became the Lagoon itself:

The spelling and dialectical differences in recording these names are legion (even more legion than my “typos”…), so please do not jump too fast to try to correct those (I’ll see your spelling and raise you one…).  I do greatly appreciate historically verifiable (and legend!) corrections and enhancements to help us all better our understanding of the past.  There are many great libraries, archives and scholars out there – past and present – who have pieces of this puzzle in their grasp!

Murano is a bit distant from the other five communities, and is still a community independent from Venice proper today.  Again, sadly, Ammianco and Constatiacum were lost beneath the waves, and Torcello vastly reduced by natural and human intervention, as is Mazzorbo Occidentale. 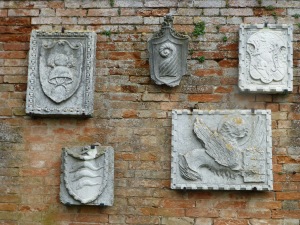 For a while, ponder those communities as one City – much as one thinks of Venice as one City since the various communities now known as Venice came together after 421, combining rather than continuing the sectarian rivalries among the existing towns in the central area of the Lagoon.

Many historians and commentators state that “Torcello” at its peak housed over 20,000 inhabitants, yet no one shared their idea of how that many people (plus institutions, commerce and campi) could have coexisted within the physical limitations of the Torcello we can see today – even allowing for a great amount of erosion into the lagoon.  Before such erosion, the islands would have been even closer together than they are today, making an understanding of how such a city could have functioned more easily comprehended.

Modern photogrammetry techniques have helped identify the footprint of old Altinum under existing farmlands on the mainland, as well as identifying some of the now-buried traces of Ammianco, Constanciacus and Torcello.  Consider for a moment…

Was Torcello “Venice North”, or was Venice “Torcello South”?

The next time you wander out to the Northern Lagoon, muse for a while about “Venice to the North” that was for many years larger than and more successful than Venice today.  Then enjoy the wonders of the places and their peoples today!