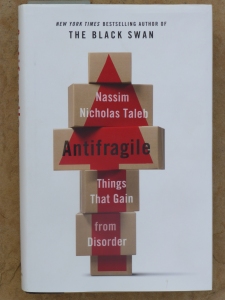 “Antifragile” has been on the shelves for a year now, I read it when it first came out, yet I felt constrained from writing a short review until now.  The ideas it contains continue to percolate, become more comprehensible, illuminate practical application, as I ponder them and continue to follow discussions about antifragility.  You need them, too.

The book is part of Nassim Nicholas Taleb’s “Incerto“, a series of publications beginning with “Fooled by Randomness” (“on how we tend to mistake skills for luck”), followed by “The Black Swan” (no, not the movie…, rather about “how high-impact but rare events dominate history” and how experts are blind to or intentionally deceptive about them ), and supplemented by “The Bed of Procrustes” (a collection of Taleb’s philosophical aphorisms).  They all build inexorably to the discovery and explication of Antifragility.  These books do not need to be read in any particular order, each containing both independent constructs and contextual relations with the others without being chronology dependent.

Nassim Nicholas Taleb continues to develop this concept, “antifragility”, based upon his discovery that there was no word for the true opposite of “fragile”.

“Antifragile” is not merely about a newly coined word, however.  It is an earnest exploration into “how to thrive in an uncertain world”.  Most people carry an understanding that being fragile can lead to difficulties if not handled properly.  Taleb uses the example of a fine china tea-cup to help visualize “fragility” – drop it one inch a hundred times and it very probably will not break.  Drop it once by a foot or more and you will be picking up the pieces of your former tea-cup.  Fragile, so you keep it stored away in a cupboard or china cabinet.

One would prefer oneself or a desired object to be “robust”, sustainable.  If dropped (reasonably, of course), it will not break.  As Taleb points out, it will never improve, either.  Instead, strive for “antifragile” – things and people who gain in strength or value by undergoing reasonable stresses.  Exercising is a demonstration of the concept.  Done in moderation, exercising stresses muscles and structure, breaks down and helps eliminate unnecessary or unhealthy substances, and – with proper time between repetitions – actually makes one’s body stronger and more resilient to future stresses.

In other words, antifragility demands fundamental asymmetry in what you do – more upside than downside.  In Taleb’s words, from the “Antifragile” Glossary (p. 427),

“When someone has more upside than downside in a certain situation, he is antifragile and tends to gain from (a) volatility, (b) randomness, (c) errors, (d) uncertainty, (e) stressors, (f) time.  And the reverse.”

There are many reviews of “Antifragile” in print and on-line, some wildl dilettantism, some blindly and aggressively dismissive – and all of those two categories fall into the “fragile” category of criticism.  Some “review” based upon chapter titles, an extremely egregious error relative to books written by Taleb!  Others attack his metaphors, allegories and personal experiences in the book.  His very style is important to understand, however, not the biases of his attackers.

Taleb writes from his own life adventures and research, both very extensive in this field, and never encourages or recommends anything that he has not personally encountered or experienced.  He has “skin in the game” – his own, not the alleged “skin in the game” of those who profit and become more antifragile from your losses from doing what they recommend but then stand safely to the side, metaphorically “holding your coat” while you plunge blissfully into the abyss they have designed for you – where your downside radically exceeds your upside.

Good advice:  Learn to recognize those people, shake the dust off your feet and stay away from them.

Nassim Nicholas Taleb is entirely in opposition to those who would evidence “Do as I say, not as I do”.  His term for them and other hypocrites is, simply, “charlatan”.  Good word, full of meaning!

Don’t be a charlatan!

For me, one of the key concepts expounded upon in the book is Iatrogenics.

“First, do no harm”.  Iatrogenics is causing harm while trying to help.  “Harm done by the healer, as when the doctor’s interventions do more harm than good” (Glossary, p. 428) – does anyone remember Thalidomide?   Taleb shows how medicine is replete with iatrogenics – simply hearing or reading the possible side-effects of touted medications in pharmaceutical company advertisements might provide a hint, and as critically shows how iatrogenics infests “political science, economics, urban planning, education, and more domains” (page 113).

Nassim Nicholas Taleb posits that socio-economic life and the human body are heavily impacted “matters in which we have historically combined a low degree of competence with a high rate of intervention and a disrespect for spontaneous operation and healing – let alone growth and improvement” (page 114).

This reminds me too much of the massive downsides of the actions of the “new humanists” and “central planners” of the past two centuries – apparently working on steroids today, downsides that killed, enslaved and/or impoverished millions.  The reader may easily add a few more domains from their personal experience.  Beware of the elite class, those claiming special wisdom, smarter than the unwashed masses, who know what is best for you (but do not practice it themselves).  As their 19th Century progenitors said, when advocating perfecting humankind through their methods, “If you have to break a few eggs to make an omelette, what are a few thousand lives to perfect humanity?”

Remember always that technology may change and improve, but how humans use and abuse one another has not improved one iota since The Fall.

Nassim Nicholas Taleb goes a lot further than advocating avoidance of charlatans and iatrogenics in the quest to survive – nay, prosper – through increasing antifragility in life.  Book VI within “Antifragile” addresses “Via Negativa” – the application of subtractive knowledge in life to determine “how NOT to be a sucker”.  As Louis Sullivan said, before and perhaps independently from Mies van der Rohe, “Less is more“.  Verifiable evidence of risky behaviors, iatrogenic actions and undesirable outcomes (fragile at worst, merely robust at best) would best lead one to eliminate actions, objects and things from one’s proximity and plans that are likely or proven to produce more downside than upside.

A key performance specification for increasing antifragility is:

So many other concepts critical to really comprehending what antifragility is and why it matters to each of us are included in “Antifragile: Things That Gain from Disorder”.  Nassim Nicholas Taleb has approached the subject from a wide variety of angles, always vectoring in on key problems and keys to solutions, whether discussing risk, time, redundancy, errors, equilibrium, modernity, procrastination, competence or lack thereof, asymmetry, optionality, greed, fallacies, disorder, linear and non-linear, prediction, logic, ethics, convexity, opacity and more!

The reader can literally plunge into any section of the volume, divided into seven “Books” aggregating 25 chapters, to gain a significant dividend of knowledge, a bundle of angst, many humorous interludes, and a satisfying quantity of “upside” – if followed by thinking and practical application.  Although sections dabble into “technical” discussion (with the author’s advice given on where to “skip over” if you are not into that sort of thing), the book will be followed by a truly technical treatise – currently nearing completion.

The author delivers no panacea, no world-changing prediction, no “final word”, while delivering to his readers a priceless understanding and goal:

From a professional background in architecture, community and regional planning, urban design, leadership, and fine arts, this blog provides insights on ethics, leadership, architecture/planning/urban design, Venice, and whatever intrigues me at the time. Enjoy!
View all posts by randysrules →
This entry was posted in Book Reviews, Lead On, Renaissance, Renaissance Rules and tagged Antifragile, Ethics, Iatrogenics, Lead On, Nassim Nicholas Taleb, Renaissance Rules, Taleb, Zeitgeist. Bookmark the permalink.