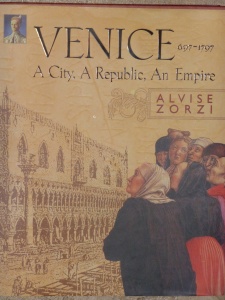 Birthday presents are always most appreciated, and this heavily illustrated volume (illustrations were sourced from 42 photo archives) with text by a scion of a Venetian Old Noble Family (a most important distinction in the continuous, more than millennium history Venetian Republic) is a special treasure.

Alvise Zorzi is a native of Venice whose family roots there can be validated from written records back to 964 A.D., so a lengthy early presence is extremely likely.  The family lent “one doge, one cardinal, 11 procurators of S. Mark’s and the feudal overlords of Curzola in Dalmatia, Lampsacus and Karistos in Greece, and Levkas in the Ionian Islands” (p. 280) to the public service of Venice – not without ample reward in many cases)

He has written numerous books about Venice, while also serving on the Association of Private International Committees for the Safeguarding of Venice and Chairman of the Committee for the Publication of Source Material on the History of Venice, among other services and accomplishments.

Along the way, the volume is not arranged chronologically, but by key subjects in which Zorzi provides a panoramic overview of that which he feels will give us a better comprehension of La Serenissima through history – at least until it ceased to be an independent nation in 1797.

A walk through “Venetiae Caput Mundi”, “The Keys to Power”, “The Venetian Empire”, “The Love of Her Subjects”, “The Territories of St. Mark”, “Commerce and Industry”, “Wars, Armies, Victories and Defeats”, “Eleven Centuries of Independence” bridges between myth and archives.

Including the first Doge in 697 and the last Doge, who resigned in 1797, the Venetian Republic elected 120 men to lead the nation, all chosen from among the leading (that means commercial) families.  Several failed and were “encouraged” to tonsure and enter a monastery; several were assassinated by rival family members or hirelings, along the way.  Only one attempted to turn his elected office into a dictatorship.  His portrait is missing, the space draped with black cloth, on the south wall of the enormous, cavernous Maggiore Consiglio (which you may characterize as the largest of the parliamentary chambers, if you would like)  now dominated by Tintoretto’s Last Judgement – the largest oil painting on earth – on the east wall and Veronese’s The Apotheosis of Venice – placed above the ducal throne.  Yes, a republic – but with an elected Duke (Doge) and a ducal throne in a Ducal Palace ( Palazzo Ducale ). 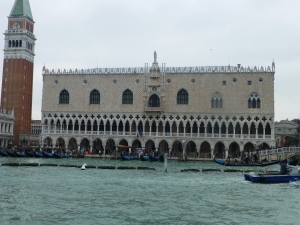 Venice never had a King, Queen or Emperor with a requisite hierarchy of lordly titles below.  The wealthy and ancient families were the hereditary nobility, with many layers of councils and deliberative bodies governing bureaucracies below and enacting laws that limited the independent authority of those above (including the Doge) in a unique construct that was perhaps the key to a millennium of successful growth and survival with minimal internecine warfare and relatively little class turmoil.

Despite devouring every book about Venice that I can find, I found this one to be very special.  Sections focusing upon the outlying territories, construction of buildings and ships, mode of the day(s), commerce and the environment were particularly valuable for enhancing the work of other authors and commentators.  One particular treasure is the photographs of major construction, fortresses and palaces alike, in the territories – including Crete, the Peloponnesus, Dalmatia, Istria, the Aegean Islands and elsewhere in the “Empire” are superior to many that I have seen elsewhere.

The master ship builders of Venice were also the master carpenters on major buildings, creating keel-inspired wide-span structures over churches and palaces alike.

An “insiders” viewpoint of the decline and fall of independent Venice – an unraveling that spanned several hundred years unsuccessfully countervailed by lavish living and excessively opulate displays of wealth that rendered many families into paupers – is particularly well-considered in Zorzi’s book, as in several of his other more scholarly works.

Venice owned remarkable territories, originally out of an intent to assure control of the sea lanes in the Eastern Mediterranean for its commerce, for centuries.  Major islands that are traditionally part of Greece were Venetian for 500 and more years before being lost to Muslim invaders.  The Peloponnesus was under Venetian rule for lengthy periods (between defeats and “trades”) off and on again for centuries as well.  The history that could be told in those places, of families, faith, work, art and daily life, would cover twice the entire history of the United States and of many other “modern” nations.  Beware!

Evidence of land-poor palazzo-dwellers, living in the original servants’ quarters and renting out the Piano Nobile and every other better floor to ex-patriots and tourists while their iconic edifice sloughs away around them, is quite widespread in the City.  Perhaps this and other lessons about Venice would best be considered by 21st Century “masters of the universe” elsewhere as a particularly somber and sobering…

Another caution: The cover price for this book is in the range to be expected for a well-illustrated “coffee table” display item.  However, a little careful shopping at your favorite book vendor will deliver savings to you.  Consider that in the City itself, it is nearly impossible to find…

…The Price of Empire Marked Down!