Posted on January 9, 2014 by randysrules

One of the newer buildings in Venice, Italy – a massive housing complex completed 100 years ago (built in 1913) to a design by architects Alessandri & Fantucci in their version of early 20th Century Veneto-Byzantine style – is impossible to miss if you alight from the #1 Vaporetto at the Sant’ Angelo stop by Campiello del Teatro on the Grand Canal in Sestiere San Marco.

We told a bit of the in situ story of this building in a previous post, so please bear with a little repetition here – the intent is for you to consider a 20th Century infill that is relatively benign, despite its great size and regular perimeter, and respects a number of architectural traditions without being a copyist work.

Casa Nardi – or perhaps Casa Narisi based upon the Commune di Venezia’s rendition of surrounding names as “Narisi” – towers over Corte dell’Albero.

An important detail: Corte dell’Albero translates as “Court of the Tree”, but where is the tree? The layers of history can be peeled back to reveal the source of the appellation by viewing Jacopo de’Barbari’s remarkable “Veduta Prospettica”, drawn in 1500. A large, healthy tree is visible in a Campazzo next to the Grand Canal in what appears to be a slightly larger Campiello del Teatro than today’s rather constricted edition at the dock, now separated from “contemporary” Corte dell’Albero by Ramo del Teatro.

As you may suspect, you will not find a theater at Campiello del Teatro or along Ramo del Teatro. The former theater is now an upscale hotel, and gist for another story…

Turn your attention back to, and around, the exquisitely detailed, yet huge, Casa Narisi. In fact, if you take the shortest route from the Sant’Angelo vaporetto stop to Campo Santo Stefano, you will become “up close and personal” with at least four of its walls – two on the Corte, one along narrow Ramo Narisi, and one along Fondamente Narisi. A bit of a detour back toward the Grand Canal into Corte Locatelli from the southwest corner of the Casa after emerging from Sottoportego Narisi will grace you with yet another Narisi wall.

With such a massive composition, details matter. For our purposes, focus on the ground floor – your eye level – as you make the circuit. For most of the perimeter – except for more than half of the Fondamente Narisi including the Sottoportego – the wall is punctured by approximately 30 windows – mostly single square openings plus a few pairs – and a number of well-designed entrances. 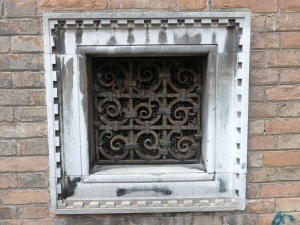 The windows are not all the same. Several different stone surrounds – plinth, sill and jambs – were designed and constructed, and the windows protected by many different designs for the iron grillwork.

As you “count coup” on grillwork, do not ignore the entrances and upper floor fenestration on each side of the structure.  Look up!

What looks like a modern, minimalist translation of Venetian-Byzantine style from a distance provides carefully considered detail upon close inspection.  Could this be…