Venice Myths: Is There Only ONE (or TWO)(or THREE) “Canal”?

Articles and reviews continue to pop up in fairly high volume on the internet and in published materials stating that Venice has only one waterway actually named a “Canal” – or maybe two, or maybe three.

The lack of originality in repeating this myth is boring!

Certainly, names change over the course of history, yet these articles are being published in the 21st Century!  A review of current maps of La Serenissima reveals, at the very least, the following waterways named “Canal” (or “Canale”, an alternate and very Venetian usage) within the main body of the City:

Some maps refer to several other Rii as Canale ( or vice versa…), but those occurances might be considered drafting and editing conceits. 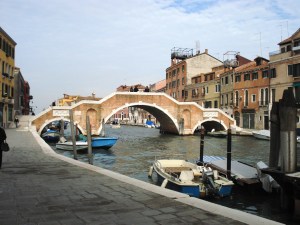 A whole perimeter of Canale surrounds the main archipelago of the City, plus a whole network criss-crosses the Lagoon, as well as canals within the Burano, Murano and Torcello island groups.  Two examples along the north side of the main City are the Canale delle Fondamenta Nuove (north of Cannaregio and Castello) and Canale delle Sacche (northwest of Cannaregio)

These days, the Canale Contorta San Angelo is in the news as a proposed route for an ill-advised major cruise ship channel from Marghera to the Giudecca Canal to access the Stazione Marittima.

Even for the historically minded – after all, “History begins where memory ends” (Aldo Rossi), there are more than a half-dozen named Canals in the main City of Venice.

If you hear someone say, or read that there is only one canal (or only two) (or only three) in Venice, please gently disabuse them of that false notion.

It is the real myth.

From a professional background in architecture, community and regional planning, urban design, leadership, and fine arts, this blog provides insights on ethics, leadership, architecture/planning/urban design, Venice, and whatever intrigues me at the time. Enjoy!
View all posts by randysrules →
This entry was posted in Planning & Urban Design, Venice Italy and tagged Aldo Rossi, Canals of Venice, Crafting Place, Italy, Venetian Lagoon, Venice. Bookmark the permalink.
Loading Comments...
%d bloggers like this: