The Rise of Raphael

A too-short 2008 sojourn in Urbino, Italy, Raphael’s home and a bastion of Renaissance innovation, rekindled thoughts from virtually devouring a decades-earlier exhibition of scores of original Raphael sketches at the Accademia in Venice, and even earlier studies at the University of California, Berkeley.

The progression of Raphael’s work and its relationship to that of his mentors, peers and competitors is very similar to that of talented and innovative people in many professions and trades even today, perhaps throughout the history of mankind.  How we perceive ourselves in that continuum, in our personal Renaissance, may be profitably considered as we study Raphael.

Michelangelo said of Raphael, “He had his art not by nature but by long study”.  That statement would seem to rise out of the atmosphere of artistic competition that prevailed in Rome during the early decades of the 16th Century.  By then, Leonardo da Vinci had long since proven to be a great master of art and scientific inquiry.  Michelangelo himself was reaching full maturity as an artist, and had the fame and experience of the works of his youth in Florence as a foundation for greater endeavors.  On the other hand, Raphael was very young, a new and seeming inexperienced arrival on the cosmopolitan Roman scene.

Michelangelo, in the heat of the competition among artists for the great commissions available in Rome, apparently regarded Raphael as a brash and insensitive young upstart, and perhaps more importantly, as a fraud.  Many contemporaries of the time felt that Raphael had acquired his apparent skills of figure representation and overall composition through plagiarizing from the works of other masters, which he could see in abundance in Florence and Rome.  These apparent acts were perhaps considered to be clear signs of Raphael’s blatant contempt for the “establishment’s” true artistic merit and for those artists themselves, for most of the “original” works were also very well-known throughout the Renaissance artistic community.

Thus, Raphael’s Sposalizio followed quite closely Perugino’s rendering of the same scene, and the composition of The School of Athens, which seems a continuation from Dilberti’s Porto del Paradisio, may have been considered to show a lack of ability to determine “correct” composition or acceptable interpretation and portrayal of the depicted stories on the part of Raphael.  Therefore, Michelangelo could intimate that Raphael’s talent was not naturally developed over time through experimentation and thought, but by a careful study of the works of others.  Since, on the other hand, Michelangelo could see himself as combining great artistic talents developed over many years in both sculpture and painting, and as adept at fulfilling difficult commission requirements quickly with bold and innovative work, he saw himself as the necessary victor in any competition for new work.

Such sharp criticisms by contemporary artists, and especially by Michelangelo, were perhaps very unfair to Raphael, as viewed in the now-historical perspective of his overall work.  One should consider Michelangelo’s statement in a different light.  It may serve as a key to the slow evolution into an independent style on the part of Raphael, from an early total devotion to the precepts of Perugino’s workshop.

During the Italian Renaissance, it was quite common for most painters to portray a certain set of religious subjects, including the Madonna and Child, The Pieta, a variety of saints and Biblical stories.  One of Raphael’s first truly independent acts as a painter was his 1504 Sposalizio (“Marriage of the Virgin”, now in Pinacoteca di Brera, Milan), although his composition was indeed very similar to that used for the same subject by his former tutor, Perugino. 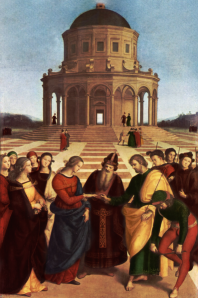 However, instead of following Michelangelo’s line of attack, implying that Raphael copied the works of others because of a singular lack of talent,  one might consider Raphael’s Sposalizio as a criticism of Perugino’s dry, rather bland portrayal of the scene.

The denouement of Raphael’s obviously great improvement over Perugino’s efforts, in combination with Raphael’s recent departure from Perugino’s workshop, seems hardly coincidental.  It is a bold striking out towards independence and artistic mastery ont he part of Raphael through a part realistic, part symbolic, rise of student over master.

Beyond such a statement of independence, Raphael’s occasional take-offs from the work of other masters apparently served as a challenge, a means of increasing his skill in the craft of painting through a “competition” with similar works already completed and available for comparison.  When Raphael found his skill and talent had developed to be equal to, if not greater than, that of those masters, he turned toward a similar course of self-competition and improvement.

The best illustration of Raphael’s careful and studied advancement of style and composition can be seen in his series of Florentine period Madonnas.  The series of continuing advances, accompanied by an increased perfection of detail, indicates a painstaking study of results along with a soul-searching self-criticism on his part.

Where other artists of the period usually refined their study sketches again and again before arriving at a “perfected” cartoon and producing, finally, a painting, Raphael probed far deeper.  He entertained the study of the subtleties of tint and hue, light and shadow, which cannot be foreseen in sketches, reaching development only in a final painting.  Although all of the Madonnas are masterpieces in their own right, for Raphael each was a step in a continuing “experiment” to find a better solution, and to consciously improve his stylistic endeavors.

In such a manner, Raphael became a force to be reckoned with in the competitive artistic world of the early 16th Century.  Rather than once again beginning in the depths, only to flame briefly and die as many others had done before him, Raphael undertook to better what he had found around him by building upon it as upon foundations.  He succeeded.