Venice – Fire Amidst the Waters

“The Great Fire” of 1105, “The Rialto Fire” of 1514, “The Arsenale Fire” of 1569 were all monumental, widespread fires that each destroyed a large area of Venice.  Other conflagrations may have been as terrible more locally, but records probably went up in smoke, like the 899 fire that burned at least Angelo Raffaele in western Dorsoduro and was recorded as having “swept the whole district”. 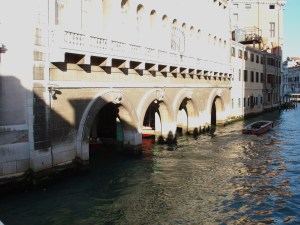 The unfortunate results that can come from burning straw and wood for warmth, uninsulated cooking, glass or ceramic kilns and metal forges inside wooden buildings with straw roofs, or the aftermath of lightening strikes and earthquakes – whether caused or aided and abetted by accidents, neglect, natural causes, “learning curve” misfortunes.

In “The Great Fire” of 1105, apparantly 23 churches were badly damaged or destroyed.  By extension, all or part of 23 neighborhoods in the City suffered major destruction during that one fire!

Eventually, city leadership banned straw roofs – which existed on some surviving or rebuilt churches at least as late as the 14th Century, and perhaps through the Rialto Fire of 1514, even after most churches and larger buildings public and private were built of brick except for many roofs!  They relegated the glass-making industry with its dangerous ovens to Murano.  Other risky industries were located in or relocated to what were at those times edges of the City.

Still, wooden roof structures and furnishings, as well as cloth hangings and candles, are subject to fire damage regardless of the materials used for walls and roofs, so the individual losses are also extensive over the centuries.  In our “modern” times, it is the contents of a structure and their misuse that is a primary source of fires.  Environmental conditions, like building in or too near wildlands and wild wind conditions in which many of us have lived, also set conditions for monstrous blazes, all too predictable.

Here are the church losses due to fire that I have been able to ascertain to date from the records and accounts available to me:

1105 – “The Great Fire” – 23 Churches destroyed across six sestiere.  I found the following twenty-two:

Which church – replaced or gone forever – was #23?

Very few such losses have been incurred during the past several centuries, a tribute to more fire-resistive construction, a higher quality of appliances, and the extraordinary efforts of both citizens and emergency response personnel to both prevent and rapidly suppress fires.

Perhaps, when historians comment upon the lack of written records regarding so much of Venice’s early history, the many fires may finally be understood by some of them to have consumed a great quantity of records, art, structures, and most tragically…

Too many lives of those who created and sustained Venice.

From a professional background in architecture, community and regional planning, urban design, leadership, and fine arts, this blog provides insights on ethics, leadership, architecture/planning/urban design, Venice, and whatever intrigues me at the time. Enjoy!
View all posts by randysrules →
This entry was posted in Recapitulation, Reformation, Renaissance, Venice Italy and tagged Churches of Venice, Fire Prevention, History, Memory, Recapitulation, Reformation, Renaissance, Venice. Bookmark the permalink.

2 Responses to Venice – Fire Amidst the Waters